In February of 2018, Human Rights Watch released a report which outlines how nursing home patients with dementia in the United States are improperly given medicine that they do not need.

This is a national issue that needs to be addressed. Elderly people are being unknowingly put into danger and abused by this practice. It is causing elderly people to suffer even become like zombies.

According to an article released from WTHI-TV 10 in Terre Haute, Indiana, nursing home resident’s children and loved ones reported that their parents were turned into zombies because of what nursing home administrators have admitted doing.

According to the article, they admitted to administering drugs without the appropriate diagnosis, informing the resident or loved ones of the risks, or securing informed consent.

The article references the Human Rights Watch report as well as a CNN report, that reported on how drugs were being misused in nursing homes. Both reports highlight the dangers of overprescribing medication to nursing home residents.

One of the largest issues in this matter is the fact that residents and their responsible parties are not being informed of the change in medication or the risks of taking such medications.

According to the article, the Food and Drug Administration has not approved such practices as an effective way to treated dementia.

The Food and Drug Administration has not deemed antipsychotic drugs an effective or safe way to treat symptoms associated with dementia — including dementia-related psychosis, for which there is no approved drug. In fact, the FDA cautions that these drugs pose dangers for elderly patients with dementia, even doubling the risk of death, the report shows. Other possible side effects outlined in the report include an onset of nervous system problems that may cause “severe muscular rigidity” or “jerking movements,” as well as low blood pressure, high blood sugar, blood clots and other problems.

The article states that researchers spoke with family of residents who were not informed of the risks and dangers of antipsychotic medications. Some even stated that they felt that their loved ones would be evicted if they did not agree to the medication changes. 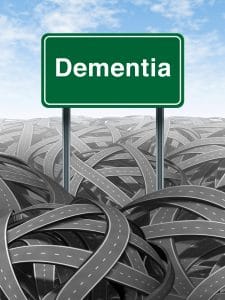 Importance of Proper Diagnosis and Treatment

According to the article, there are about 50 million Americans over the age of 65, and that number is expected to steadily increase as time goes on. Properly identifying illness is the responsibility of nursing homes, care facilities, and medical professionals. Properly identifying these illnesses could be the differences in aging with a decent quality of life, or rapid decline, even death.

The following flyer can be used to help differentiate Dementia symptoms and Schizophrenia symptoms. It is important to remember that most cases of Schizophrenia are diagnosed in a person’s early twenties. It is rare that an elderly person be properly diagnosed with Schizophrenia. The following is a flyer from a group that wants to distinguish between the two diagnoses:

According to the WHTI article, Dementia can be treated without medication:

There are plenty of ways to deal with dementia-related symptoms or behaviors that don’t involve pharmaceuticals, the report lays out. Improvements can be achieved through providing activities, reducing loneliness, creating routines, encouraging relationships with familiar staff members, offering exercise and promoting programs like music therapy and pet therapy.

There are several important questions you should ask when you or someone you love is facing this diagnosis:

Keeping all of these things in mind as you watch your loved one in their care facility could be the difference between life and death. It is extremely important to stay informed and seek information from the care facility. If you feel that your loved one has been misdiagnosed and has suffered because of it, feel free to comment below or contact me. I will be happy to discuss your situation with you.